Everything You Need to Know About Pool

Everything You Need to Know About Pool

Eternally Popular in sports bars and basements, pool is one game that’s lasted the test of time – but it can be intimidating for new players to learn. Online tutorials aren’t always easy to follow and just watching a game isn’t enough to clue you into rules or guidelines.

Fortunately, we’ve got everything you need to know about the game of pool below. From its history, to how to play, rules, and even what supplies you’ll need for your game room, here’s what you should know.

The History of Pool

Although it’s now commonly called pool, the game was originally named Billiards, and it has a history that stretches all the way back to the fifteenth century. Created in Northern Europe, the first version of pool was actually played on a lawn, not a table.

It was similar to croquet, but eventually, players moved the game inside and started using pool tables. Because it was first played outside, the green on a pool table simulates grass. The original pool tables also had different railings, which were only there to prevent the balls from falling off.

Up until 1835, it was common for pool tables to use wood, but over time, players found that wood tables would warp, which is why they began using slate instead.

Originally, players also used maces instead of cue sticks. Rather than striking the balls, they would shove them. The mace had a large head that made it inconvenient to use, especially when a ball wandered near the edge of the table. Once the cue stick was developed in the 1600s, players began using that, and while nobody knows when, the use of chalk was eventually introduced as well.

From Billiards to Pool

For the first few hundred years that it was played, pool was referred to as billiards, or even more specifically, pocket billiards. Pool was another name for a collective bet amongst players, and while many sports had pools, the name stuck to billiards.

Nowadays, pool rooms are places where you can play pool, but they were originally betting parlors for horse races. While patrons placed bets on horses, they needed something to do in between races, which is where the game of pool came in.

Eventually, pool rooms and betting parlors were no longer synonymous and many pool rooms were just areas for people to play a game of pool.

During the twentieth century, pool rooms were slowly dying out and becoming less popular, but the game got revived by two different events. The first was the release of the movie, The Hustler in 1961, which starred Paul Newman and showed a gritty portrayal of a pool hustler’s dark life. The movie was incredibly popular, and as new excitement blossomed and new players decided to learn, new pool rooms opened up across the country.

Then, in 1986, The Color of Money was a sequel to The Hustler, and it generated interest in the game for a whole new generation. More pool rooms opened, but this time, they were more upscale than the old rooms.

How to Play Eight-Ball Pool

As popular as it’s been across the world, there are different variations of pool: English Billiards, Straight Pool, Carom, and Snooker, but the most popular variation may be the American-style eight-ball pool. When most people think of pool, they’re usually thinking of eight-ball pool, and it’s usually what you’ll see people playing at your local pool hall or pool room.

Eight-ball pool uses cue sticks and has sixteen balls (fifteen object balls and one cue ball), and you can play it as a singles or doubles game. Compared to some of its other variations, eight-ball pool is quicker-paced, but it requires just as much skill as any other type of pool.

Half of the balls are stripes and the other half are solids (with the exception of the cue ball), and your goal in winning the game is to hit all your balls into pockets, and then hit the eight-ball last.

There’s no score system, as both players take turns hitting their balls, and whoever pots all their balls and the eight-ball first is the winner. Here’s a more detailed explanation about playing pool:

If you accidentally knock the cue ball into a pocket, you forfeit your turn, and your partner gets control of setting up their next shot.

Beginner players may be too focused on hitting the cue ball to think much about technique, but more experienced players know there are several types of pool shots they can take:

Regardless of what kind of shot you plan to take; most advanced billiard players will tell you that succeeding at pool comes down to learning how to take advantage of the angles on the table.

Supplies You Will Need to Play Pool

Whether you’re playing at a pool room or you’re planning to play in your home, there is some necessary equipment you’ll need for the game:

Fortunately, if you’re playing in a pool room or a bar, you shouldn’t need to bring any of your own equipment.

Rules can vary depending on which variation you’re playing, but these are the standardized rules provided by the World Pool Billiard Association (WPA):

What is a Jump Shot?

While it’s less official than the shots listed above, a jump shot means hitting the cue ball over an object ball to hit another one. Jump shots can be tricky for even experienced players to hit, and some players may not count this shot.

How Do I Pick Out a Cue Stick?

If you’re planning to play pool frequently, you may want to invest in your own cue stick – but picking one out can be a challenge. Length, width, and even material of cue sticks can vary, but it’s almost impossible to know what you’ll like just by reading about certain cue sticks.

If you can, try to purchase a cue stick in person rather than online. This way, you’ll be able to hold the stick in your hands and see how natural it feels for you.

How Do I Take Care of My Cue Stick?

Once you’ve purchased your cue stick, you’ll need to take care of it if you want it to last the test of time. Try purchasing a case for your cue stick so that it’s not regularly exposed to moisture or humidity and be sure to store it in a dry place.

From its rich history to an extensive list of rules, learning how to play pool can seem overwhelming to beginners – but once you get the hang of it, it’s usually easier to master than you may think.

To learn more about playing pool or to shop from a wide selection of high-quality pool tables, contact or visit our experts at Everything Billiards & Spas. 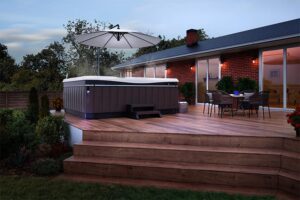 Your Guide to Creating a Private Hot Tub Installation

A hot tub is one of the very best backyard amenities you can invest in. It’s a year-round feature that

The Health and Lifestyle Benefits of Hot Tubs

Now more than ever, people are looking for ways to improve their mental, physical, and emotional health at home by 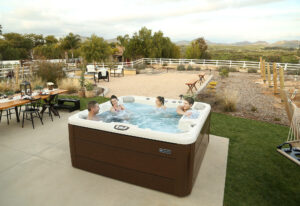 Creating the Hot Tub Installation of Your Dreams

Dreaming of a hot tub installation for your home? We don’t blame you. More and more people are discovering the